Skip to main content
This weekend will be hold the annual jam at la Source trail at Toulouse, the twelve edition ! Our rider Jems Muller and the locals worked hard last winter, as mentioned in a previous news, they changed the whole Donut section, one of their famous line.
The program is simple and the same as every year : riding, some watering obviously, BBQ, concert on Saturday night and a photo exhibition, from our English friend PJ Turns, who is good at making photos.
Rendez-vous at Toulouse on 2nd and 3rd September. 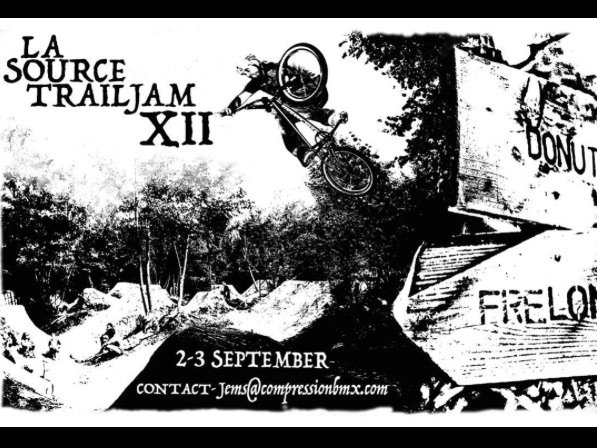 As we have already mentioned, our rider from Britany, Bruno Abiven works with Toine in their art foundry, close to all their creations made of dirt.
More than a year ago, they took in charge the project of a sculptor from eastern France, his name is Franzi, who created a sort of robot which is 4,5m high.
The goal is to produce it in bronze, specifically a white bronze (it contains 17% of manganese which gives its color); each part of the robot has been overmoulded in sand then cast with metal (from models which were made from polystyrene at scale 1 by Franzi). After more than 2000h of finishing and mainly polishing, each part of the robot were assembled at the joints (knee, hip, elbow, shoulder), without to forget his accessories such as sword and shield; like any Celtic warrior or knight who inspired the artist.
This peaceful warrior as his creator named him, is a tribute to his dead uncle who was tall and strong, who transmitted to him several human values that he wanted to transfigure. It's a timeless message, materializing the quiet strength. 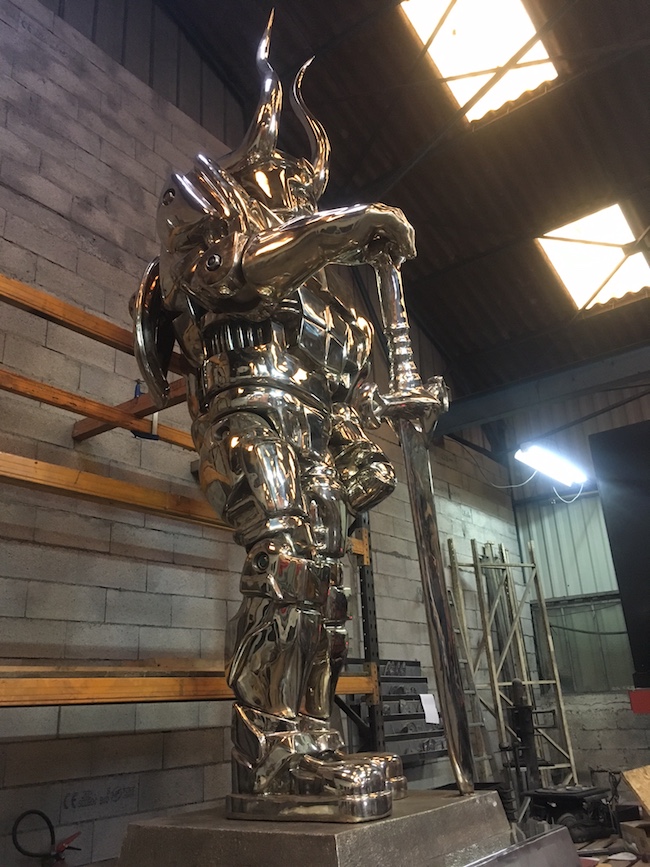 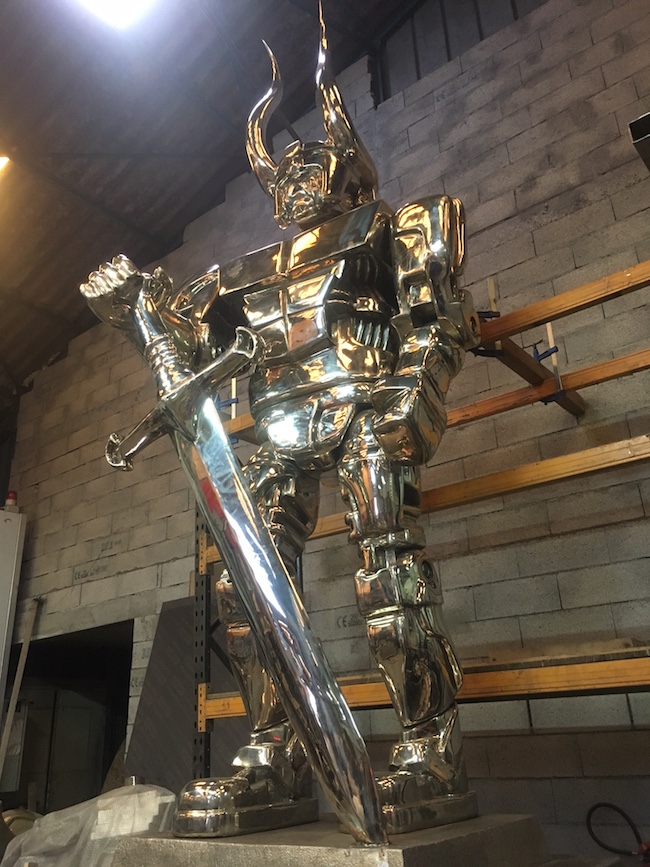 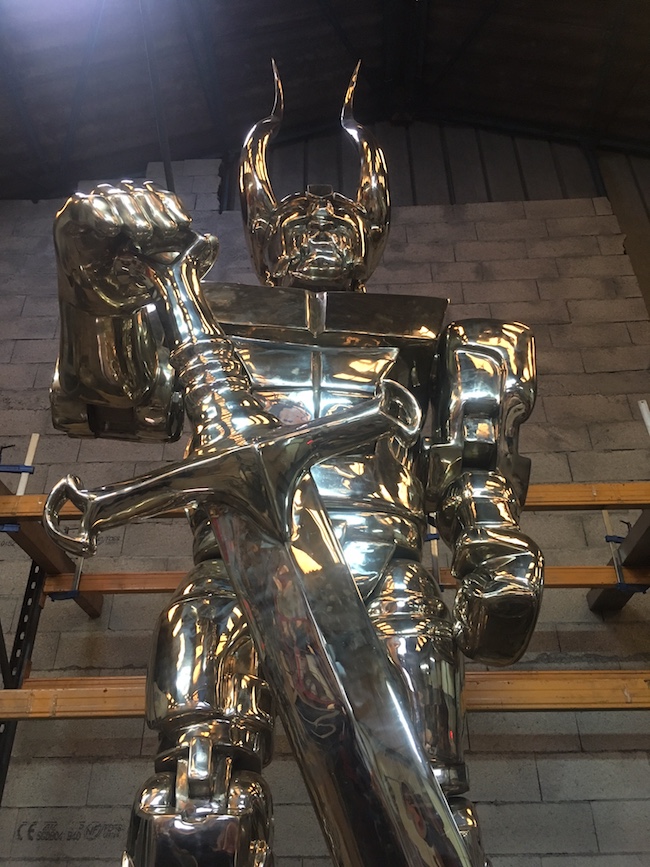 We have made several custom sprockets recently, in fact it is a service that Shape bicycles can offer, including more time to be realized.
So we made and delivered to UK, a custom 44T spline 19mm and black anodizing, to Dan from Brighouse trail. This is the largest sprocket we made !
We also manufactured a specific sprocket to answer the needs of our rider Bérenger, we made a racing sprocket, 43T with 4 points bolted. It’s a unique model, we haven't planned to produce this sort of sprocket yet.
In the end, we realized a custom 33T spline 19mm and black anodizing, to our friend Antoine from Normandy. He asked to us to make it in black in order to add his own touch. In fact, he makes an engraving sentence between branches of the sprocket, you can read « Pedal to the metal » ! Black anodizing with laser engraving is such a beautiful association. 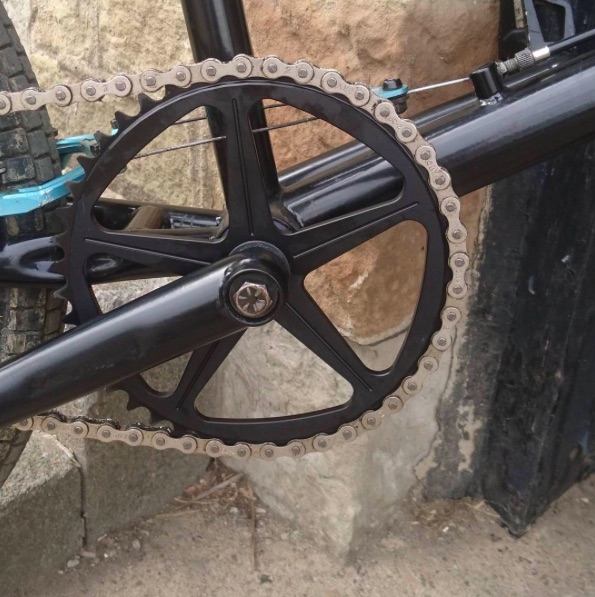 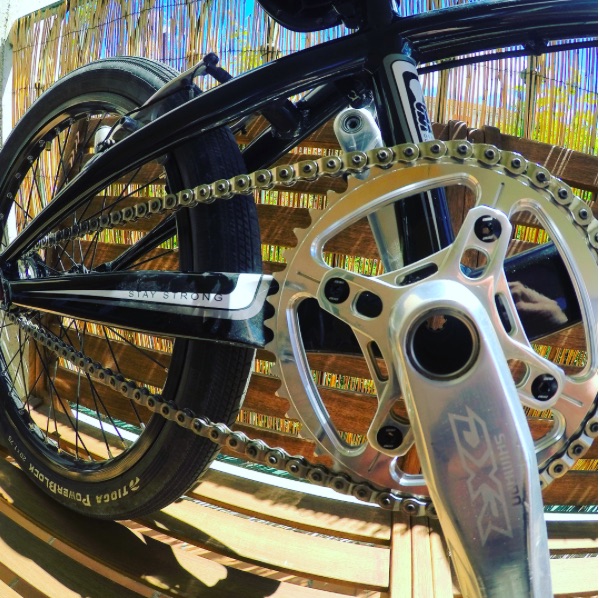 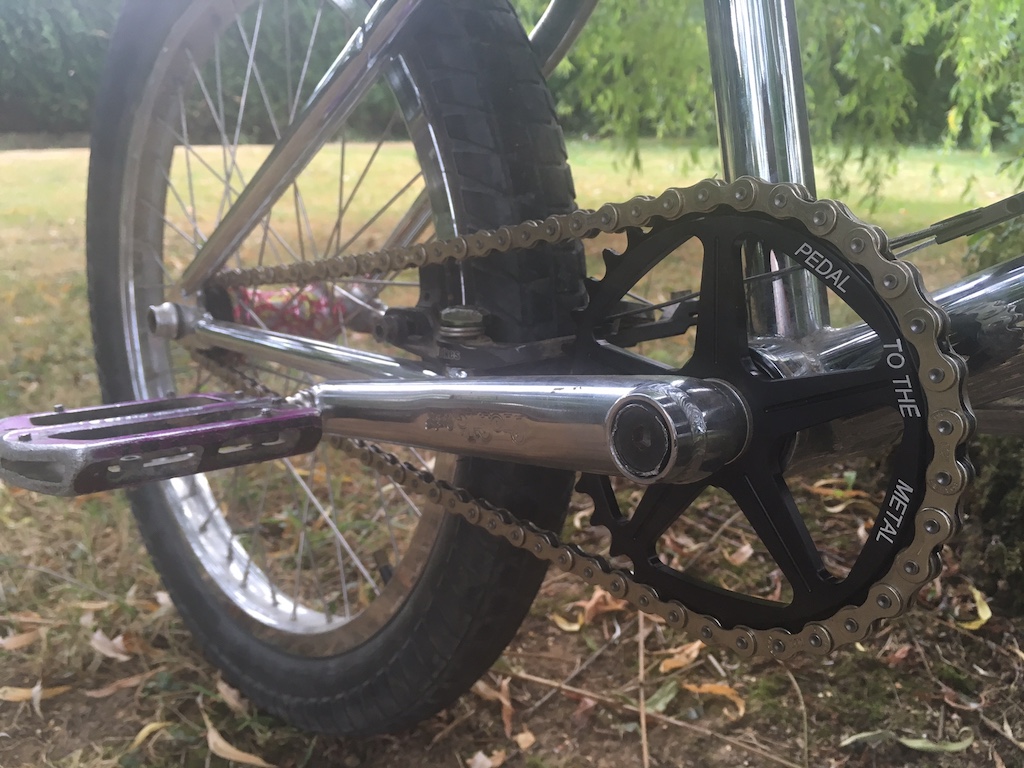 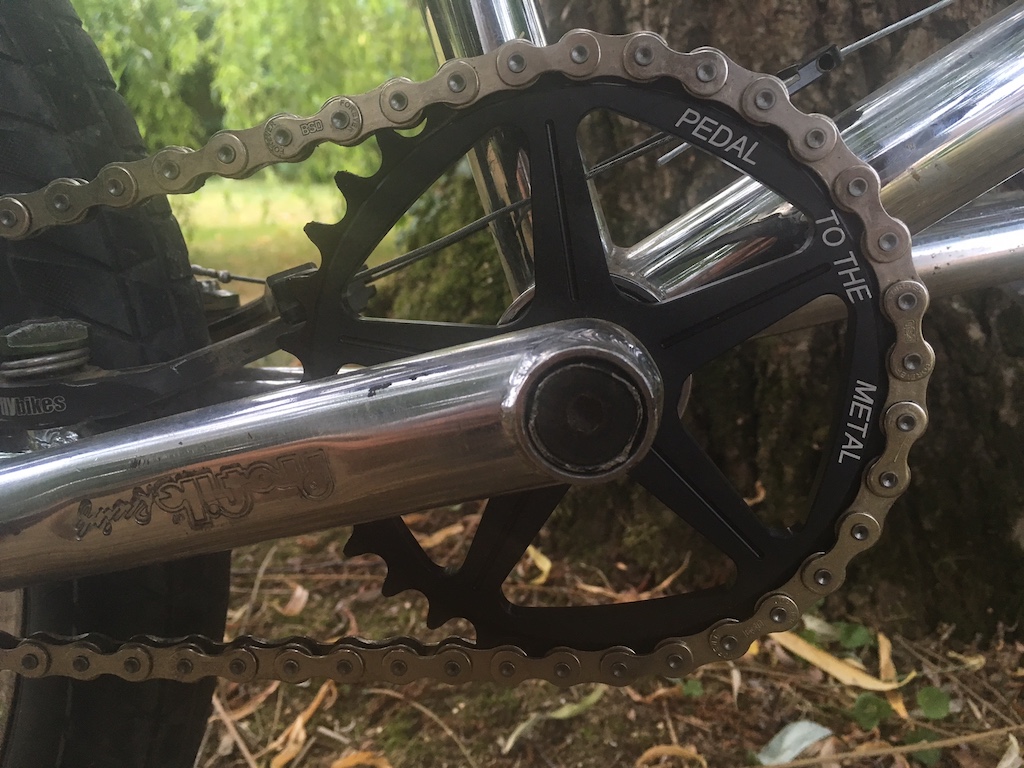 We were able to follow our daily life lately, mainly about the fabrication by ourselves of several Shape bicycles sprockets.
We want to show you some photos of those sprockets, which the team riders are currently testing, Bruno (28T spleen 19), Bérenger (25T spline 19), Jérémy (25T spline 22) and Jared who will receive his one soon (30T spline 19).
Those sprockets are designed to be assembled with Profile racing type of adaptor, offering all possibilities in terms of crank (standards 19, 22, 24mm and spline 19 and 22mm).
From design point of view, some details need to be validated or refined, find below some photos. 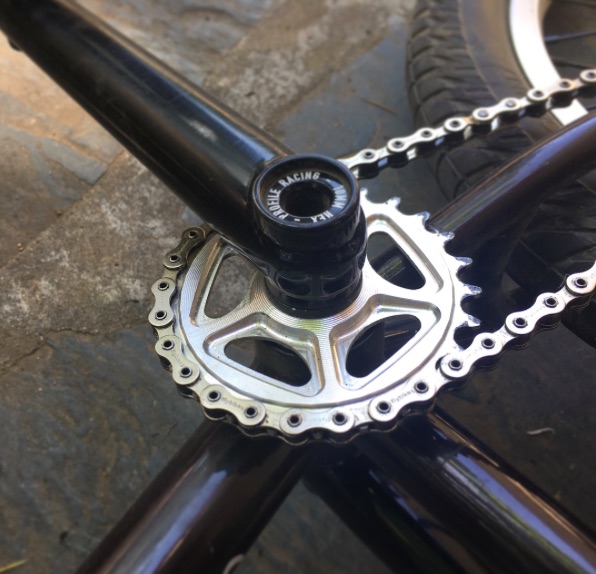 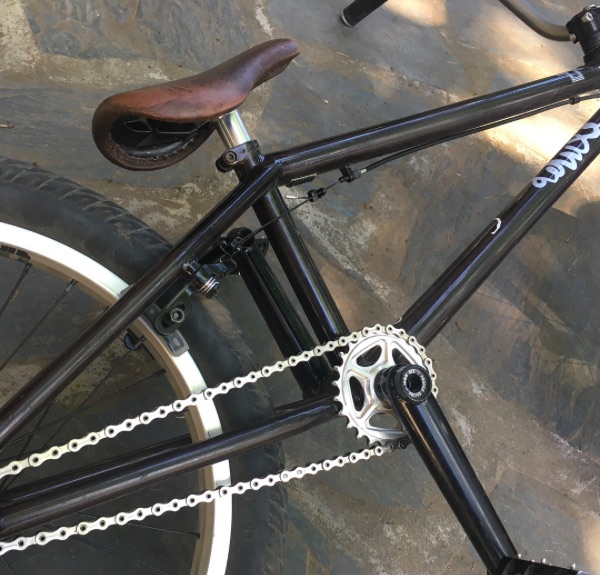 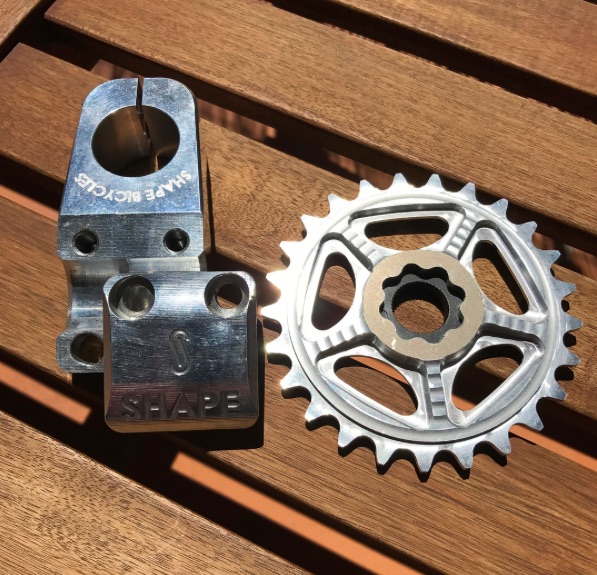 Our rider Jérémy Muller has just announced the dates of the next jam of la Source, it will take place the 2nd and 3rd of September 2017.
Two big changes have to be noticed this year, the whole modification of the famous line Donut (see older new) and especially the addition of a high start, as a result it is the end of pedaling !
Jérémy and the locals have mastered the organization of their event, this one has become one of the main event of the French trail scene ; see you in Toulouse !

Our rider Bérenger Cordier traveled a bit lately, he has not left his home spot Peynier (and close spots) for several years. This is why, in the beginning of the sunny season, he decided to enjoy ride new spots, especially in Spain. I will translate his summary soon...
The last jam at la Source in Toulouse, was again a success as usual.
Our friend Pef edited a video of the event, eventhough to real appreciate this good atmosphere, we advise you to take part of the event.

Another Shape bicycles DIY sprocket has been machined, this time it's a 25T, still in spline drive. This one is intended for our Southern rider, Bérenger Cordier, who is about to built up a new BMX.
Our goal is to machine the three main models of our sprocket range (25, 28, 30T) in order to validate our manufacturing process and especially optimize it (time, tools, cost...etc.).
The next sprocket planned in machining is a 30T, for our American rider Jared Ball.
Below some photos of machining for pleasure ! 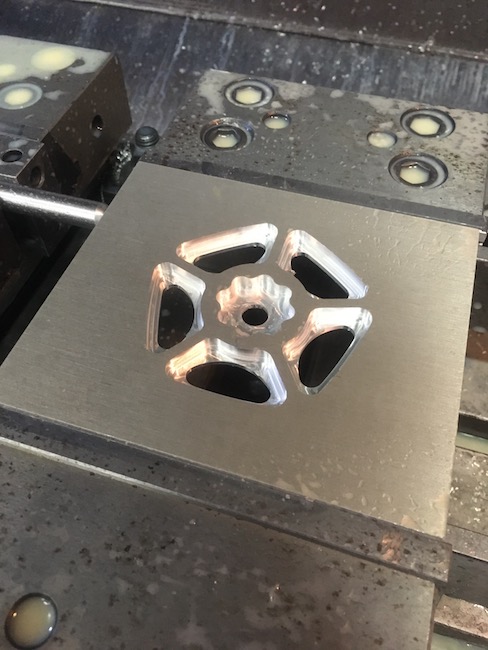 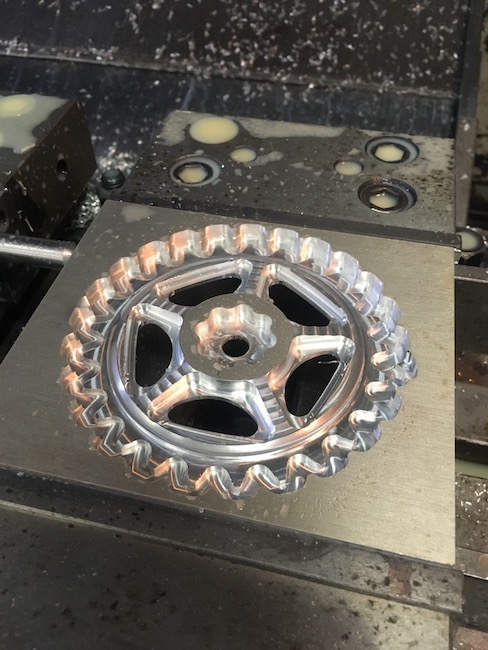 We haven't given you some new about our rider from Toulouse Jems Muller for a while. After finishing his studies, Jems can think about trail again.
After the beautiful jam last September, Jems and his friends, including several new motivated members, undertook a big job this winter. They are completely rethinking their famous section "Donut", unchanged since 2006, with its U shape composed of 5 jumps and its famous 180° vertical berm.
Their plan is to make a section in the shape of an open "8" while keeping the current berm and changing the end. They want a fun section, with different heights, everything should be ready for testing in late spring, before you can find some photos below. 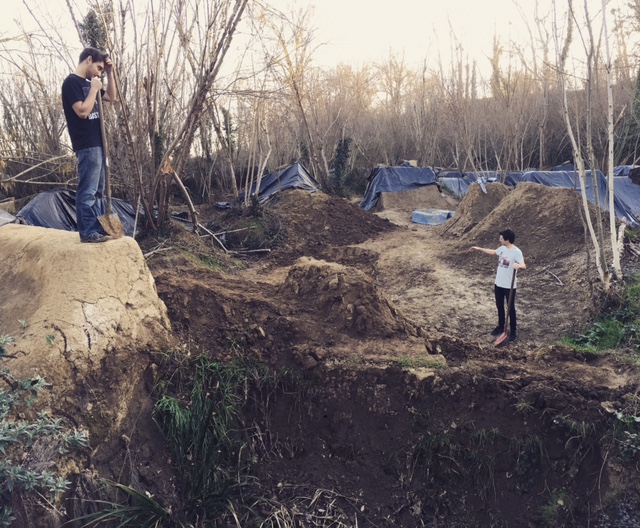 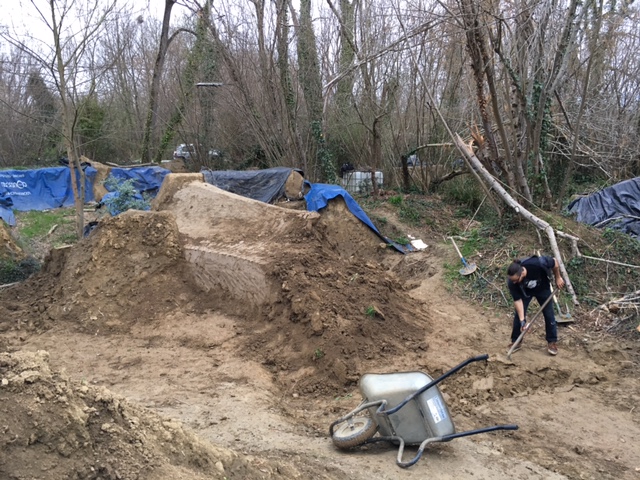 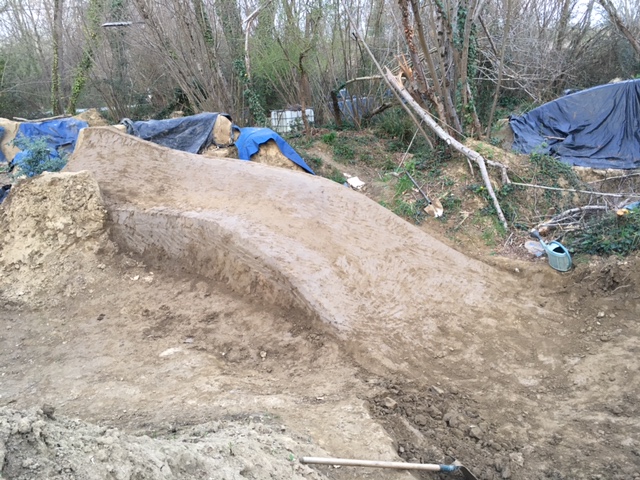 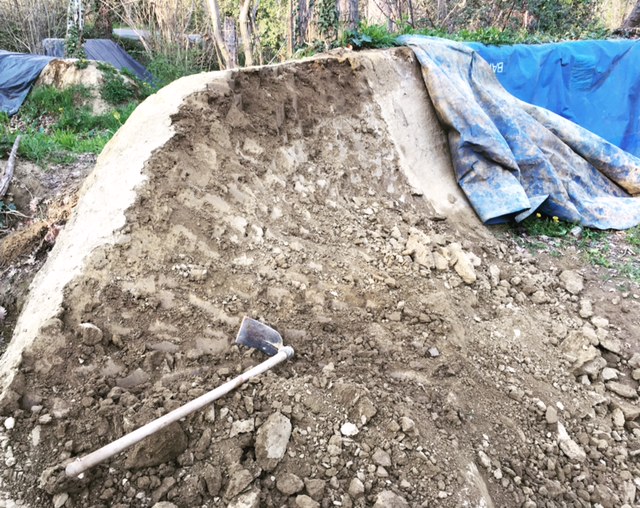 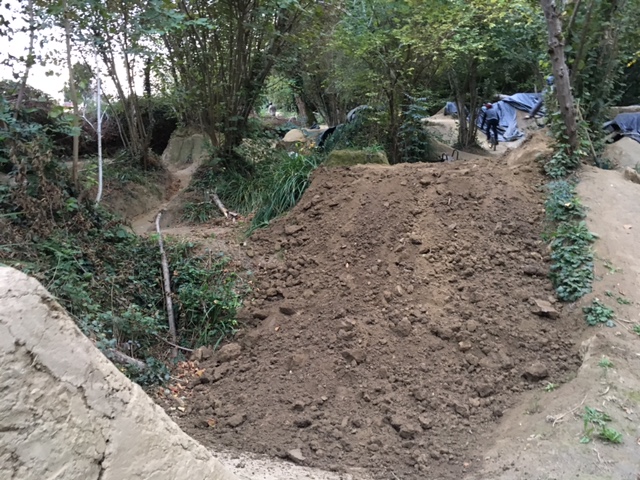 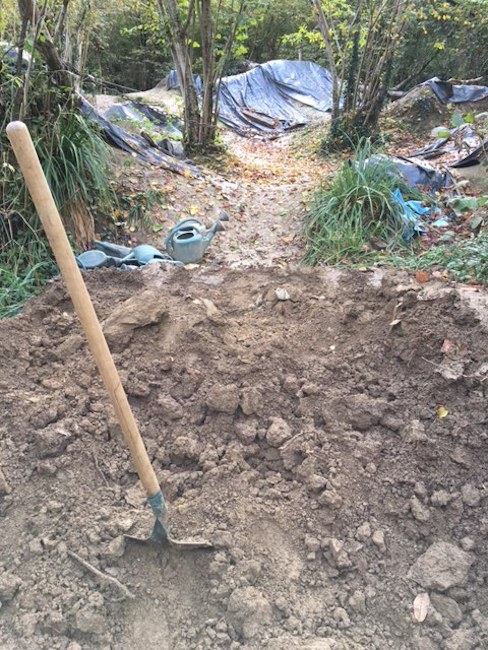 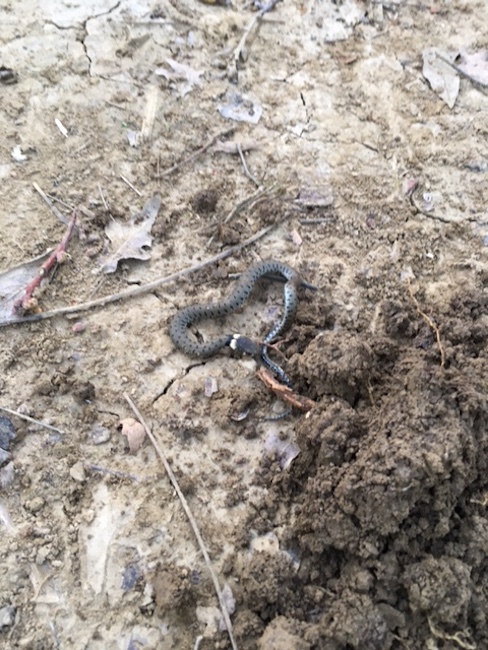 We are happy to present to you the final result of our first in house fabrication.
This 28T sprocket is a 19mm spline version (with a Profile racing Sabre insert), with a black anodizing touch.
We are satisfied with this sprocket even if there are few details to improve, please note that it is a prototype with non-definitive design.
This sprocket will be quickly assembled on the bike of our local rider Bruno, he will have the honor to ride this true prototype ! 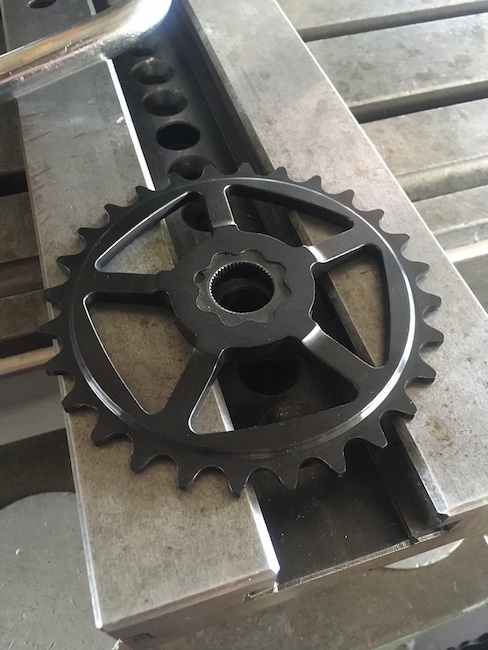 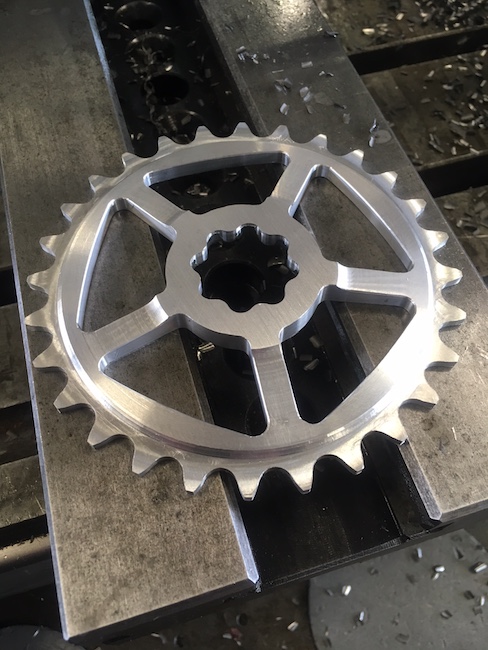